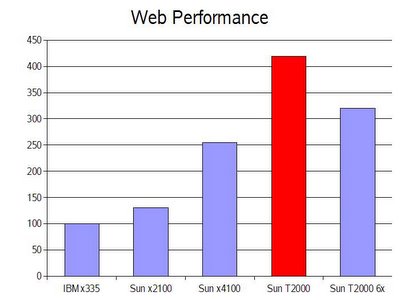 We did real production benchmarks using different servers. Servers were put into production behind load-balancers, then weights on load-balancers were changed so we got highest number of dynamic PHP requests per second. It must sustain that number of requests for some time and no drops or request queue were allowed. With static requests numbers for Opteron and T2000 were even better but we are mostly interested in dynamic pages.

T2000 is over 4x faster than IBM dual Xeon 2.8GHz!
Except x335 server which was running Linux all the other servers were running Solaris 10. Our web server is developed on Linux platform so it's best tuned on it. After fixing some minor problems web server was recompiled on Solaris 10 update1 (both SPARC and x86). No special tuning was done to application and basic tuning on Solaris 10 (increased backlog, application in FX class). Web server was running in Solaris Zones. On x4100 and T2000 servers two instances of web server were run due to application scalability problems. On smaller servers it wasn't needed as CPU was fully utilized anyway. Minimal I/O's were issued to disks (only logs). Putting application into FX class helped a little bit.

Perhaps putting application in a global zone, doing some tuning to Solaris and application itself plus tweaking compiler options could get as even better results.

For more details on T2000 visit CoolThreads servers web page.
You can also see SPECweb2005 results which do include T2000.
Servers configuration:

I'd be curious to see how the numbers would look if Zope were used in lieu of PHP. Solaris has traditionally had a really bad rep with running Zope, but I suspect that it's not really deserved. I've certainly never seen any real benchmarks backing it up.

While PHP is blazingly fast for simple dynamic apps, Zope has some significant advantages for heavy-duty dynamic apps, and the results for PHP won't reflect how well the servers will work with Zope.

Just one thing should be noted -- when running Zope on a multi-processor system, you'll get better performance binding a separate Zope instance to each processor and using ZEO to coordinate them.

Cost per performance is AMD.

So yes the AMD is cheap but you would lose some in the overheads. Also support costs and power may make the T2000 cheaper when you look at everything.

Robert - have you got comparisons against older sparc based machines (eg V240, V440, V480, or V880)? Might be an interesting comparison for those looking to upgrade.

3 AMD boxes would cost you a hell of a lot more in terms of electrical power and the human cost of system maintenance. You need to factor that in.

It certainly is a victory when you
compare prices. For example, UK prices:

Not too shabby for 4x improvement.

while they can be difficult to run, and certainly cannot be called "real world" since what is "real" for one user is "unreal" for another, the SPEC benchmarks have at least one very admirable trait - they include sufficient information, or pointers thereto to allow the reader of the result to know exactly what the workload was and how the systems were configured.

It is one processor versus two not 8 versus 4...8 cores are on one die in this case.

Person who compares 3 AMD boxes to one T2000, don't forget you loose effeciency when you scale out instead of up. You may also need to throw in the cost of a load balancer, and probably need some sort of shared storage, or dedicate one as a file server for the others to pull off of, etc...

It can be a complex decision in balancing the scale out vs scale up, and the best choice will not always be the same depending on the application.

Horizontal scaling vs vertical scaling is certainly a difficult decision.

Horizontal scalability usually gets you increased availability as well as adding capacity (at the risk of some increased overhead).

In this case you will get fewer points of failure.

xeon have horrible performance regardless and are energy wasters. i guess the amd wins for performance of price and heat/power usage.

What would be very interesting, is to throw a bit more of a real world mixed load into this equation.
Traditionally the Intel type architectures won over once there was a bit of on the fly compression or like. Certainly on an aggregate level, the T2000 will do well, but what about when it comes to fewer users with heavier mixed loads?

It was a real-world benchmark as servers were put into real production.

Any tests on newer systems?