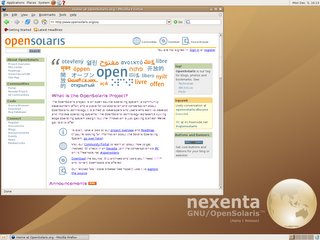 I've just installed NexentaOS on my laptop - this is GNU distribution based on Debian and Open Solaris. I must admit that it works really good - automatically detects my network, X, etc. - quite impressive. Looks like DTrace, ZFS, SMF works just out of the box. Tools for packet administration also work - I tried to upgrade some of packages and it just worked! Good job. I think this could become great distribution for all people who prefer GNU utilities but want Solaris stability and features like DTrace, ZFS, etc. It's definitelly worth to look at it. Debian users will probably feel quite comfortable with this distribution. Keep in mind that this is alpha release (still I'm impressed how much has been achieved in such a short time - Open Solaris went public in June this year).
Posted by milek at Monday, December 05, 2005

Thanks for sharing your experiences! I'll have one myself :)

I think information sharing is overestimated in the Web era. More people would be using NexentaOS (or other OpenSolaris daughters) if they only knew how cool it was.

ZFS beats them all. Zones... yummie. I'm going to have a look right now!